It is evening time on August 13th and I am looking at a beautiful rainbow as I write this. It reminds me of a time when I gave a book of children’s Bible stories to a little girl many years ago.

The child saw the story of Noah’s Ark and the accompanying picture of people, including children, drowning in the great flood of Genesis 7. This story had a devastating effect on the little girl and I’m sure turned her mind totally away from anything to do with God.

Unfortunately, the story was never satisfactorily explained to her nor the meaning of the rainbow that followed in Genesis 9:13, I have set my rainbow in the clouds, and it will be the sign of the covenant between me and the earth.

This was God’s promise to Noah, and all of us, that He would never again do such a destructive thing to His people.

I’ve never been sure whether the flood story is allegory or not, but one thing I am sure of is that it’s effect on one little girl has haunted me since the day I was made aware of her great fear and apprehension.

Just as the rainbow of thousands of years ago was meant to be an apology from God to His people, this evening’s rainbow reminds me that because of a cruelly depicted story, a young child may have grown up to be an unbeliever…and for this I am truly sorry.

I pray that there has been enough evidence over the years of a God who loves her unconditionally and will continue to do so for the rest of her life.

This is my rainbow apology to that little girl. 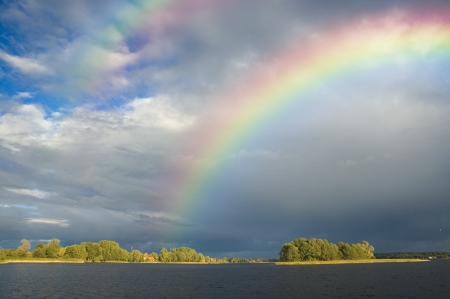 The story of the flood and Noah’s ark (Genesis 6-9) appears to be giving a lot of people a lot of trouble.

For instance, how could a loving, caring God drown the whole world except for one man, his family, and a pair of every species of animal…just enough to repopulate planet earth.

Is it purely allegorical and if so what is allegory? Here is one explanation from the internet.

Allegory is a figure of speech in which abstract ideas and principles are described in terms of characters, figures and events.It can be employed in prose and poetry to tell a story with a purpose of teaching an idea and a principle or explaining an idea or a principle. The objective of its use is to preach some kind of a moral lesson.

So, I kind of see it as God creating this beautiful planet filled with beautiful people and other creatures for the purpose of living in harmony and good will, and expecting them to be thankful and obedient to him in return. After all He’s the parent…we’re the kids.

Isn’t that what we expect from our children? We provide them with love, shelter, food, clothing, lessons for living life, and in return we expect co-operation, respect, obedience…not to mention a reciprocated love. Who of us hasn’t punished, or threatened to punish a wayward child for not living up to their end of the bargain? Except we don’t go as far as God is depicted to have done.

So, I’m thinking that whoever wrote that story, supposedly Moses, had a vivid imagination, a keen (if not warped) sense of justice, and pegged God as someone not to be tangled with. In other words, is the story of the flood one big empty threat…just like the dad who told his son, “Don’t touch that (whatever) or I’ll chop your hand off!” Really? Is it simply meant to make us pay attention to what is expected of us in God’s world?

The sad part about the people who let the flood story stop them from reading any further is that they missed the beautiful ending to the story…the part where God promised he would never do anything like that again and sent a beautiful rainbow as a sign of that promise. I don’t know about you, but I love seeing that rainbow in the clouds (Genesis 9:13).

So why am writing about that darned ark? It makes me sad that so many people are missing the rest of the story, God’s story, and all that it entails for our earthly sojourn, simply because they cannot let go of that segment with all it’s depicted horrors. All I can say is read on…you don’t know what you’re missing.