We all see things differently, don’t we? And that’s a good thing because it can become a great topic of conversation, and, in some cases we may see things in a way that opens us to new possibilities. Take for instance the eagle in this picture…it is posted as an eagle flying over water. My first reaction was an eagle doing push-ups. How do you see it? 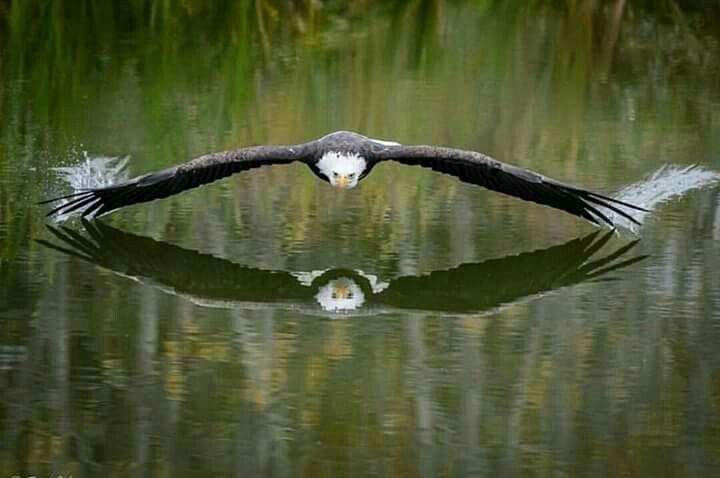 I have a problem with a few things in life, namely:

Wielding a higher education over those of lesser learning

Not seeing both sides of a situation

Not heeding our own conscience or well intended advice

Those who wield their power to the detriment of others

Those who believe their lives matter more than someone else’s

This photo reminds me of Psalm 121: “I will lift up mine eyes unto the hills…” Today, let us lift up our eyes and see beyond what we normally see. Happy Sunday.

After watching the movie, Field of Dreams, with Kevin Costner and James Earl Jones the other night, I was reminded of a quote, You will see it when you believe it. I think that might be the title of a book written by Dr. Wayne Dyer.

Too often we use the opposite of that quote which is I’ll believe it when I see it.

This was the third time for me watching this movie simply because of the good vibes it produces from beginning to end, from the whispering voice Kevin hears and follows, to the wonderful baseball heroes of the past, to the selflessness of Burt Lancaster’s character, Dr. Archibald “Moonlight” Graham at the end of the movie.

Has it happened for you…something you believed in becoming a reality?

It happened for me with my book, “My Precious Life”. I had often talked about writing a book but lacked the confidence to follow through, until I heard that quote, You will see it when you believe it. And then I began believing I would write a book. A year later I held the book in my hand.

If you believe, you will receive whatever you ask for in prayer.” Matthew 21:22

A couple of thoughts on right and wrong:

You can’t do wrong by doing right.

If it’s not right it’s wrong.

Right or wrong, that’s the way I see it.

This man, Frederick Buechner, writes some insightful messages. I love them. And so do the people who read yesterday’s quote about carrying our loved ones in our hearts, minds and stomachs. Two bloggers sent me hugs! Thank you SO much! Today I am posting a quote and giving Buechner’s direct link so whoever is so inclined, may help themselves to his writings.

“When you remember me, it means you have carried something of who I am with you, that I have left some mark of who I am on who you are. It means that you can summon me back to your mind even though countless years and miles may stand between us. It means that if we meet again, you will know me. It means that even after I die, you can still see my face and hear my voice and speak to me in your heart.”

How encouraging are these words; how poignant the message.