“A hockey stick-shaped cloud seen in Saskatoon and shared by Canadian hockey star Hayley Wickenheiser is being regarded as a tribute to the victims of the Humboldt Broncos bus crash that killed 16 people.” This is a news clip I saw on Twitter last night and I find it very comforting.

Look up at the heavens and see; gaze at the clouds so high above you. Job 35:5  NIV 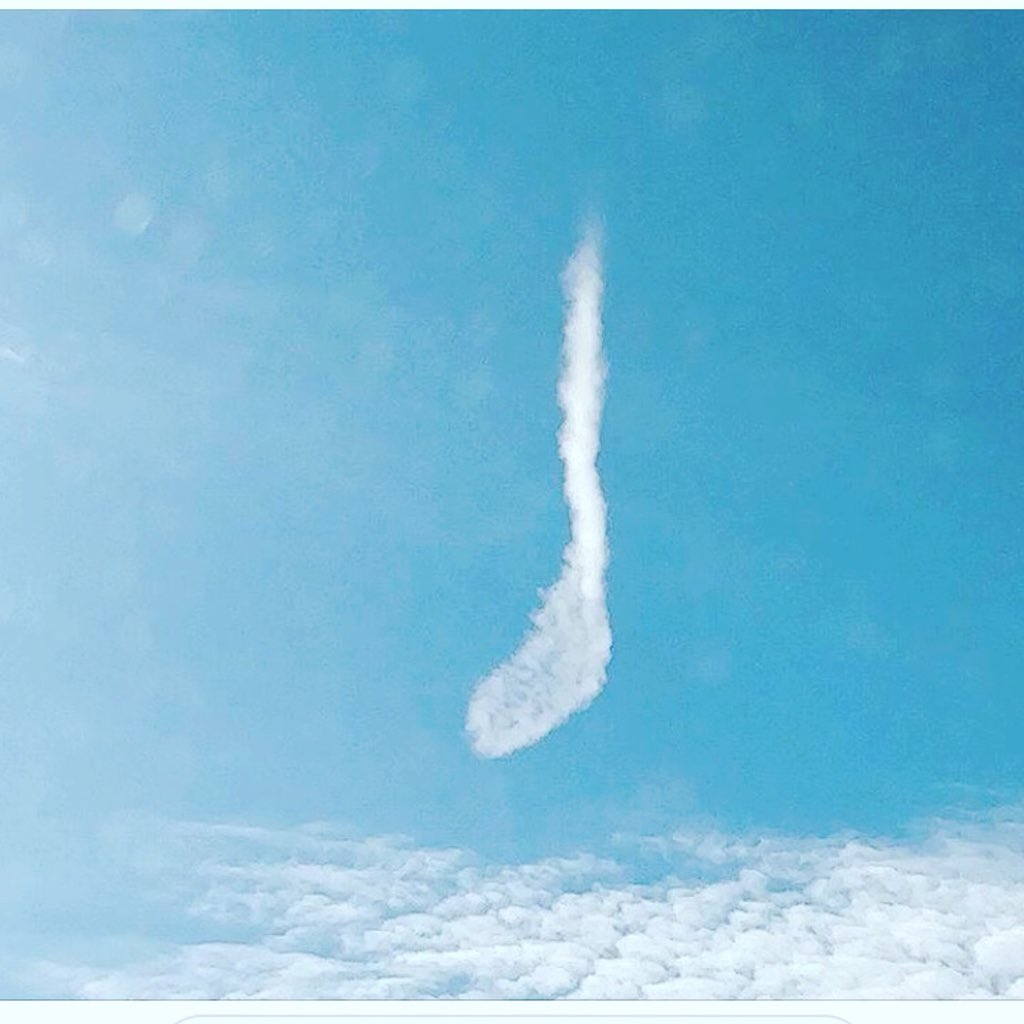 While shopping in some quaint and unique out of town shops, I discovered a sign with the following words:

My best friend and her sister had never lived apart in their lives except for a brief period when one of them was first married. Their lives were intertwined through childhood, early adulthood, middle years and elder age.

Tanya died first in 2008 after a battle with lung cancer. She was seventy-one years old, and her passing had left her sister alone for the first time in her life.

In 2014 Virginia, in her seventy-fifth year, succumbed to life-threatening injuries after being struck by a bus one sunny September morning.

The “ladies”, as they were lovingly referred to by family and friends, were together once again as the urns containing their ashes sat side by side in the final home they had shared, awaiting an appropriate burial location to be mutually decided upon by the family.

It seems that whenever a rainbow was sighted after the ladies had left earth, it was a promising reminder that they were united again, because the rainbow is a sign of promise.

Their memorial was held just last week and they were interred together in their final resting place. It drizzled rain during the committal but when it was time to honor their lives with celebration, a beautiful double rainbow appeared in the heavens over the site.

What a wonderful sign of promise that my best friend and her sister will never be apart again.

Have you ever asked a departed loved one for a sign that they still exist somewhere?

The second love of my life died in 2007, after twenty-seven years together. We had shared a good life which included our pet Yorkshire terrier who was almost twenty years old when he went to doggie heaven.

I’m one of those cloud scanners…that is, always looking for meaningful cloud shapes, like angels for example. I’ve seen them along with elephants, ducks, pigs, whatever.

One day I silently asked Jerry to send me a cloud-shape of our beloved little Yorkie…just to satisfy my hunger for a sign.

It happened while visiting an out-of-town friend. We were enjoying a summer afternoon outdoors when I looked up and saw the distinct shape of my long deceased pet.

“Look at that cloud,” I exclaimed to my friend, “what does it look like to you?”

“Yes, but what kind?” I pressed, needing reassurance.

Need I say more? Of course I breathed a silent “thank you” and have carried that sign in my heart from that day to this. Who or what was I thanking..Jerry, God, the universe? You be the judge..

“Ask the Lord your God for a sign, whether in the deepest depths or in the highest heights.” Isaiah 7:11

God can sometimes be found speaking to us in the most unusual places. On Sunday, while lunching with friends in one of my favourite tea rooms, I read this sign posted over the sink in the ladies room:

This is God. I will be handling all your problems today and I don’t need your help.

Have a great day.

And do you know what? My usual digestive problems were non-existent that day! TYG!

The first prayer from the book, Ten Prayers God Always Says Yes To is, “God, show me that you exist.” Here is an excerpt from chapter one, I Wish I Could Believe:

Does God exist? Can there be a simpler yet more important question in all the universe? Can there be one that has been the source of more mental anguish and emotional confusion in the history of mankind? It’s ironic that a question that so many people struggle with is also one that can be most easily answered by God when we put it into the form of a prayer. For when we lift our minds and hearts in humility and say to God: “Please show me that you exist…Give me some sign that you are really up there somewhere” he is only too happy to respond–sometimes with a speed that can astound us.

And that’s what happened to me in my twenty-third year. I had been a believer since I was four years old, but as happens with some of us, life gets in the way of our beliefs, causing us to either forget about God altogether or give him very little of our time. I remember going through a very difficult time both physically and spiritually after the birth of my fourth child. One day, I stood stock still in my tiny little kitchen, surrounded by three little ones and a brand new baby, feeling completely overwhelmed. Suddenly, I cried out, “God, where are you? If you exist, please give me a sign!” Shortly afterwards…like about twenty minutes…a knock came to the door. There stood two Jehovah’s Witnesses wanting to talk to me about God. They held up one of their magazines with GOD in bold letters, but I didn’t pay any attention to the rest of the message, and shooed them away, being busy with my family at that precise moment.

It wasn’t until a few days later that I realized that I had closed the door on what was probably God’s sign to me that he does exist. “Was that my sign?” I wondered. Maybe yes, maybe no, but to this day I firmly believe that it was a very quickly answered prayer. “Yes, Patricia, I am here.”

Tomorrow: Why Should I Get Involved? … God, Make Me an Instrument

Faith is a gift from God. Is it a supernatural gift? I believe everything about God is supernatural, and this brief modified excerpt from my book, My Precious Life, will explain why I believe that.

In 1977, a banner heralding the message, I’ve found it! You can find it too! had been hanging in my seventeen-year-old son’s room for several weeks. Dann had left the poster behind when he went to live with his dad. I often wondered what it meant, but didn’t give it too much thought until one evening, Kelly, who was ten, and had taken over his brother’s room asked, “Mom, what does that sign mean?”

Just then the phone rang. It was a soft-spoken woman who asked me a question.

“Have you seen a sign around with the message, ‘I’ve found it, you can find it too’?”

The hairs stood up on my arms and my body began to tingle. I couldn’t believe what I was hearing.

“Do you know what it means?” she asked.

“No,” I admitted, as the tingling sensation increased.

The woman explained that it was a message from several inter-denominational churches, encouraging people to come to God. Her message was uplifting, and at the end of it, my caller asked permission to pray with me.

It was a simple prayer to renew my faith, and ended with an invitation to attend the church she was representing. Her name was Mrs. Williams. She thanked me for listening, and said I was the first positive response after the many calls she had made that night. I told her of the conversation Kelly and I had shared just moments before her call.

“God does work in mysterious ways,” she responded.

Well, yes he does, I thought to myself as I went back to answer Kelly’s question about the meaning of the poster.

Thinking back on that particular evening, Isaiah 65:24 comes to mind: Before they call I will answer; while they are still speaking I will hear.

I just love His mysterious ways!